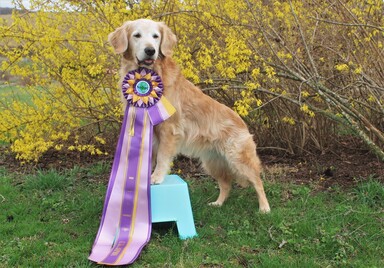 Stella is the only female puppy from the First litter and has been one of those once-in-a-lifetime dogs. She earned her CGC at 9 months and began her obedience career by stepping into the ring 2 days before her first birthday. She qualified both days in large Novice B classes, earning 3rd and 1st placements. In three weekends, she qualified 13 times, earning three titles, and 1-3 placements 11 times (7 firsts).

At the 2014 GRCA National Specialty, she continued to wow us by winning first place in the 54-dog Rally Excellent B class. At the same trial, she finished her CDX. In 2014 alone, she earned her CDX in three straight trials with two first placements, her RAE title in ten straight trials, her JH & CCA title, and a Triathlon Award! She has qualified for the Rally National Championship every year since its inauguration and the Obedience Classic twice.

In 2015, she suffered an injury from stepping in a hole at a field test and was unable to compete. The following year, still in recovery, we decided since we were on a competition break anyway, we'd add a puppy break in. And the Dream Litter was born.

At 9 years young, in 2021, she completed her NATCH through VT runs, going from novice to champion in just under 11 months. Later that year, we attended the GRCA National Specialty and she showed us she still has what it takes as she once again won first place in a huge Rally Excellent B class! She is now semi-retired, though we continue to train and compete in obedience, field, and agility because she truly loves to show. In her free time, she works as a Therapy Dog and helped establish a Story Time hour at our local library.

In early 2022, (still pending approval), three of Stella's kids helped her to achieve the GRCA Outstanding Dam title by excelling in performance events.

Stella is 22" tall, 54 lbs, with a correct, straight dark gold coat. She has all of her clearances, OFA Good Hips and Normal Elbows. Clearances can be viewed here. She is prcd-PRA, PRA1 & 2 clear by parentage and an ichthyosis  and NCL carrier. **Stella is now spayed, but still actively competing. 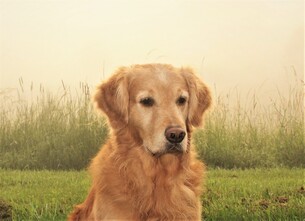 Percy the Miracle Puppy (Mr. Gold from the "First" litter) has turned out to be quite the character. He has an excellent personality and a big sense of humor. He also earned his CGC at only 9 months, just like his sister. He earned his Rally Novice title in three straight trials, earning 2 first places and a second. He qualified for the 2014 Rally National Championship in Novice and the 2015 RNC for Advanced. At the 2014 GRCA National Specialty, Percy also earned his CCA title. For a puppy we didn't expect to make it, we are now hoping he is going to be quite the performance dog! Percy is 24" tall and a lean 60 lbs. Percy is semi-retired, but still enjoys running NADAC courses and just had a blast completing his RACH in 2022.
Though Percy has all of his clearances, which can be viewed here, Percy was never offered at stud and is now neutered. 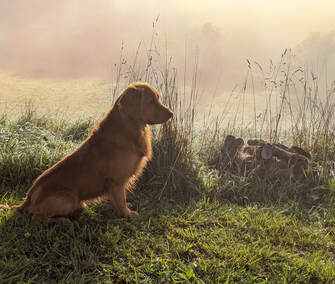 Rune is from our 2018 "Magic" Litter (Magic X Dream). We planned to keep a girl, but...this boy was an absolute standout of the litter and everything we were hoping to achieve with the breeding...so little Mr. Blue stayed! Rune is incredibly biddable and just wants to please or cuddle. He has a phenomenal temperament and gets along with everyone. We are expecting him to go far in several venues of performance sports and had hoped 2020 would see his debut in obedience, field, and agility, but we are using the time to train instead :).
Rune has all clearances, stands 22" tall, with a correct, straight, dark gold coat. Rune's clearances can be viewed here: RUNE OFA. He is genetically clear for all testable diseases.

​Rune is available for stud to select bitches. 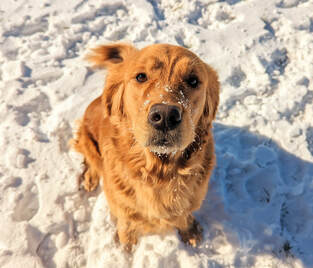 Kenzie is Clarity's full sister, and we were fortunate enough to co-own her with her sire's owner. The plan was for Kenzie to be trained as the next generation service dog for her primary owner, stepping in to take over for her sire, and not be a competition dog. However...that owner happened to move down the street from us and we are really happy with how this girl has turned out! So, we now occasionally borrow her to take her to classes and shows :).

Kenzie is approximately 21.5" tall with a wavy dark gold coat. She has all clearances, which can be viewed here: KENZIE OFA. She is an ICT carrier. 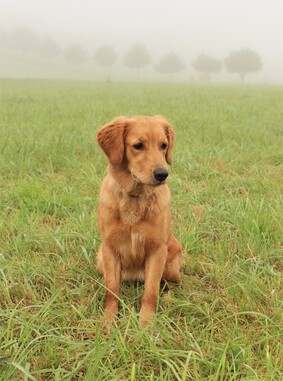 Remember how we planned to keep a girl from our 2018 Magic X Dream Litter and kept Rune instead? Well...we loved the puppies from that litter so much, we decided to repeat the breeding and hope for a girl! Dream and Magic blessed us with 3 beautiful girls in that repeat litter and they were all just perfect. We ended up keeping the tiny, spunky, athletic one and we've had no regrets.

Tali missed out on a lot due to the pandemic, but in the Spring of 2021 she finally attended her first obedience and rally trials. So far, she has performed like an old pro and earned through her Rally Excellent title and CD. She's also shown a natural affinity for field and agility and we can't wait to try all the things with her! She is super easy to train and usually only has to do something once to "get" it. Despite always being ready to go, she is very calm and super cuddly in the house. She has an excellent temperament and gets along with everyone, so we also hope to do therapy work with her in the future.

​Tali is on the small side at about 20" tall and 45 lbs. She has a shorter medium-dark golden coat that never seems to get dirty. Structurally she is very balanced and athletic. Tali has all clearances, which can be viewed here: TALI OFA. She is genetically clear for all testable diseases. 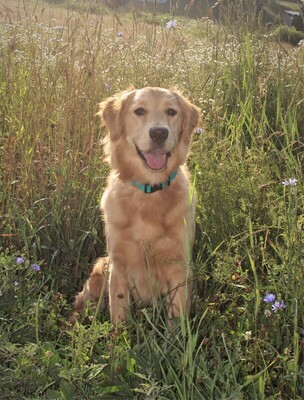 Cinder is our keeper girl from our Movie Litter (Magic X Shine). We weren't planning on keeping one, but at 7 weeks old a working home backed out and as I was taking litter photos, I threw my shoe into a field to try to get the puppies to go away from me to get better shots (not my brightest moment). Little Miss Peach looked at me like she just KNEW my instant regret of doing that, trotted into the field and picked up my shoe, bringing it right back to my lap. Well, that was it. She brought me my shoe. She had to stay.

She has matured into a gorgeous girl, essentially a more athletic clone of her mother, Shine. Also like her mother, she has been very slow to mature and at almost two years old is still very "puppy," so between that and the pandemic, we have not pushed trying to compete with her. She LOVES to work and wants nothing more than to please her people. We call her our "extreme cuddler" as she will be in the middle of playing with the other dogs, then get a look on her face like "oh no! I'm neglecting the humans!" then dive into our lap for snuggles. She is such a fun girl and we are so looking forward to our journey together!

​Cinder stands approximately 22" tall and has a medium gold, softer coat with a slight wave. Structurally, she holds true to all of our Magic kids and is very balanced and athletic. Cinder has all clearances, which can be viewed here: CINDER OFA. She is genetically clear for all testable diseases.