History of the Golden Retriever 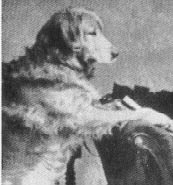 Crocus (Nous x Belle) born 1868
The Golden Retriever originated in the Highlands of Scotland in the late 1800s and owes its development to Dudley Marjoribanks, (later known as Lord Tweedmouth).   In 1865 he purchased "Nous" from a cobbler near the town of Brighton in southern England. The only yellow puppy in a litter of black Wavy-Coated retrievers was whelped in 1864.  This young dog had been given to the cobbler, as payment of a debt, by the gamekeeper of a local landowner, Lord Chichester.  Marjoribanks took this young dog with him to Guisachan, his estate in Scotland, to join his kennel of sporting dogs. Like many of the gentry of this time, Marjoribanks was keenly interested in the breeding of quality livestock as well as dogs. His interest in retrievers stemmed from the personal desire to develop a superb retriever suited to the Scottish climate, terrain and type of available game. In 1868 and 1871, breedings of Nous to Belle, a Tweed Water Spaniel (a breed now extinct), resulted in several yellow pups that became the foundation for a distinctive line of yellow retrievers.  Generations of these and subsequent breedings are recorded in the kennel records that were kept at Guisachan which are now in the Kennel Club Library.

Nous and Belle's descendants were combined with wavy and flat-coated retrievers, another Tweed Water Spaniel, and a red setter. Marjoribanks kept primarily the yellow puppies (and a few blacks) to continue his line.  Some were given to friends and relatives. Although little known outside of private circles, these yellow retrievers were used by gamekeepers and as a gentleman's gundog. Working ability was always paramount. A few Golden Retrievers, as we know the breed today, made their first appearance at dog shows about 1906, shown as "Retriever- Wavy or Flat Coated" in classes for those "of any other color". The breed was officially recognized by The Kennel Club in 1911 as "Retriever- Yellow or Golden" and finally, "Retriever- Golden" in 1920. Early Golden Retrievers had appeared in Canada and the U.S. some years before their official recognition by either the Canadian (1925) or the American Kennel Club (1932).
From the first, the Golden Retriever has been a premier worker. His biddability and calm, sensible demeanor has earned devotees in many areas of endeavor. The physical and mental traits that make the Golden Retriever such a useful hunting companion also fit him for modern activities such as obedience competitor, tracking dog, show dog, guide and assistance dogs, search and rescue, and many other modern activities.

The Golden Retriever’s athletic good looks reflect his abilities, and nothing in the dog's makeup should interfere with, or detract from, the Golden's working sporting characteristics.

Posted from www.grca.org "History of the Golden Retriever" slideshow.