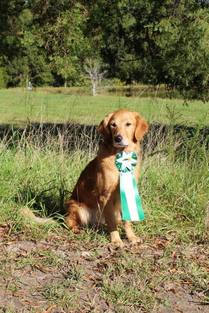 Stella is the only female puppy from the First litter. She earned her CGC at 9 months old and began her obedience career by stepping into the ring 2 days before her first birthday. She qualified both days in large Novice B classes, earning 3rd and 1st placements.  In three weekends, she qualified 13 times, earning three titles, and 1-3 placements 11 times (7 firsts).  At the 2014 GRCA National Specialty, she continued to wow us by winning first place in the 54-dog Rally Excellent B class. At the same trial, she finished her CDX. In 2014 alone, she earned her CDX in three straight trials with two first placements, her RAE title in ten straight trials, her JH & CCA title, and a Triathlon Award! She has qualified for the Rally National Championship every year and the Obedience Classic twice.
In 2015, she suffered an injury from stepping in a hole at a field test and was unable to compete. The following year, she whelped our Dream Litter and we are now continuing to train and compete in obedience, field, and agility. In her free time, she works as a Therapy Dog and helped establish a Story Time hour at our local library.

Stella is 22" tall, 54 lbs, with a correct, straight dark gold coat. She has all of her clearances, OFA Good Hips and Normal Elbows. Clearances can be viewed here. She is prcd-PRA, PRA1 & 2 clear by parentage and an ichthyosis  and NCL carrier. **Stella is now spayed, but still actively competing. 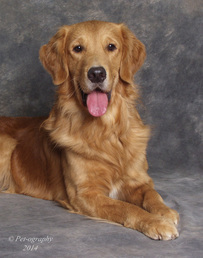 Percy the Miracle Puppy (Mr. Gold from the "First" litter) has turned out to be quite the character. He has an excellent personality and a big sense of humor. He also earned his CGC at only 9 months, just like his sister. He earned his Rally Novice title in three straight trials, earning 2 first places and a second. He qualified for the 2014 Rally National Championship in Novice and the 2015 RNC for Advanced. At the 2014 GRCA National Specialty, Percy also earned his CCA title. For a puppy we didn't expect to make it, we are now hoping he is going to be quite the performance dog! Percy is 24" tall and a lean 60 lbs. He is in training for obedience, hunt tests, and agility.
He has all of his clearances, OFA Good Hips and Normal Elbows. Clearances can be viewed here. He is prcd-PRA, PRA1 & 2 clear by parentage and an ichthyosis carrier. 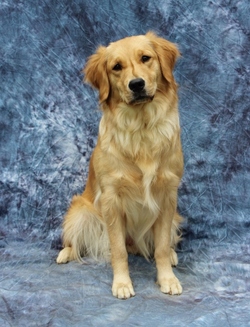 Bling came to us a little unexpectedly, but once she was here, it was obvious that I was supposed to have this puppy. She has already taught me so much. I had been on the waiting list for her litter, but cancelled since I   chose to keep a puppy from my own breeding. Then, at 8 months of age, Bling was not working well in her   home. Meanwhile, I had decided to place the puppy I kept from my own litter. After some long discussions with her breeder, Bling was placed with us, and she is here to stay, though we do not plan to breed her.
Bling is super smart, equally stubborn, and usually has her own agenda. Despite that, she is a joy to work with and an expert cuddler.  She is laid back and very easy to live with, gets along with the girls and loves to flirt with the boys. She is currently in training for Junior Hunt tests, obedience, and agility. 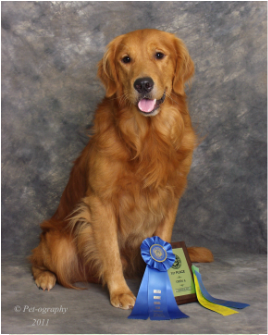 My Novice A dog in every venue, Chance is a beautiful, energetic dark golden with an excellent personality.  The son of HRCH Morninglo Daybreak Oer Dixie CDX MH** WCX OS "Shine" and Sunshine Vanna Gogh, a daughter of a conformation champion, he has a pedigree with a great mix of conformation champions, obedience champions, and master hunters. An absolute joy to work with, he always keeps me smiling with his incredible intelligence and never ending sense of humor.  Chance enjoys and excels in everything he has tried whether it be obedience, hunt tests, agility, or therapy work.  He has beautiful pigment, a wavy, but correct coat, fantastic drive, and is enthusiastic about trying all things.  He is 24" tall and weighs 65-70 pounds, putting him perfectly in the standard for a male Golden.  He earned his Certificate of Conformation Assessment (CCA) by qualifying under all three judges at the 2011 Golden National Specialty. In 2012, he was one of only 5 goldens to pass the WCX test at the Eastern Regional Specialty, which also qualified him for his versatility certificate. In early 2013, Chance completed his RAE title, earning two Rally High Combined awards for his final two legs and qualifying for the 2014 Rally National Championship.
Today, Chance trains for fun in obedience, tracking, and agility. In 2016 he finished his RAE2 title and qualified for the RAE class in the 2017 Rally National Championship. Mostly, he enjoys going for therapy visits and doing puppy zoomies through the house.
Visit Chance's photo gallery here.
Chance is CHIC certified (OFA GOOD Hips/Normal Elbows, Cardiac, and CERF/OFA Eyes cleared, prcd-PRA and ichthyosis Clear).  Health clearances can be viewed here. DNA profile is registered with AKC.